The kitchen is the centre-piece of any house.  Our bespoke kitchens are designed by our team of experts.  Not only that, they are also manufactured in our own factory by artisan craftsmen.  Our kitchen furniture is installed right across Stretton.  We make every cabinet and complementary piece of furniture by hand.

If you are looking for hand made, bespoke, luxury kitchens in Stretton, then choose Sheerin! We customise each kitchen based to our customer's needs, so each will be unique to you. Your kitchen will be pesonalised from the fine detailing on the drawers, precision machine-cut worktops to the and the individual units. Our vision is to create an ergonomic working space for all of our customers.  We provide the highest quality kitchen units, including handmade cabinets and drawers to all of our customers in the Stretton area.  We ensure all of our individual designer kitchens will enhance your home and remain in keeping with it. You will find our luxury bespoke kitchens in the very best homes in Stretton.

Stretton is a small village and parish located in Warrington, Cheshire.  The village sits at the bottom top of Warrington and is about 4 miles from the town centre.  It also include the village of Lower Stretton.  It has good transport links and is located close to Junction 10 of the M56 motorway.

Stretton is translated as 'settlement on a Roman Road' from the old English dictionary.  The Roman Road in this case was the road from Northwich to Warrington.   A large hotel and Spa named the Park Royal Hotel is noted as an attraction..  Moreover, this is advertised as a 4-star hotel offering first-class service in a tranquil setting.  Equally important, Warrington's main private hospital, which is run by Spire Healthcare is located here.

Such was the strategic location of the surrounding area in the 2nd World War, the Royal Navy Air Station existed here between 1942 and 1958.  By the same token, a number of other air bases were located off what is now the M62 towards Liverpool.

There are a number of listing buildings in Stretton.  The most famous of these is Stretton Hall which originates back to 1664 as a timber framed hall with brick nogging.  In the 19th century it was restored and extended in brick.  Likewise, other notable buildings constructed in the 18th century include Tanyard House, Stretton House, Wallspita and Firtree House.

St Matthew's Church was built in 1870 and replaced an earlier, smaller church.  It is constructed in sandstone in Gothic revival style with Westmorland slate roofs.  The church includes a west tower and northwest turret.  The original chapel was likely built in the 13th or 14th century when the village was owned by the Starkey Family.  They owned the village from the reign of Henry II. 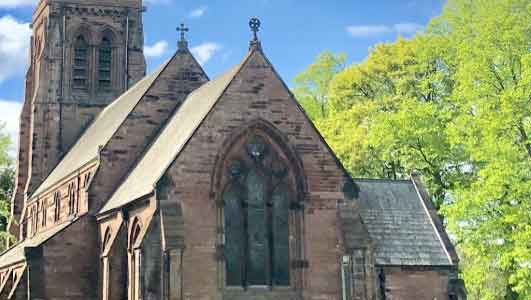