Our bespoke kitchens are both designed by us and also manufactured by us.  We make all kitchens in our own factory by our own artisan craftsmen.  We install our kitchen furniture across Cheshire including the Mobberley area.  We make every cabinet by hand, as well as all complementary piece of furniture.

Each kitchen we design is different and bespoke.  We customise each kitchen based to our customer's needs, so each kitchen will be unique to you.  This will be from the precision machine-cut worktops we produce to the fine detailing on the excptional drawers and the individual units.  We consistently provide the highest quality of handmade cabinets, drawers and units to all of our customers in the Altrincham area.  Our vision is to create an ergonomic working space for all of our customers, that will be the centre-piece of any home.  You will find our luxury bespoke kitchens in the very best homes in Mobberley and the surrounding area!

Mobberley is based in Cheshire and sits between the Wilmslow and Knutsford area.  It's claim to fame is it's mention in the Domesday Book of 1086.  It was mentioned in the Book as 'Motburlege',  It is a quaint village and according to the 2011 census has a population of 3,050 people.

It's fairly well connected and it has a railiway station that is on the Manchester to Chester line.  This gives it good access to two major Northern cities and commuter potential.  Manchester Airport lies to the north of the village and you can ofen hear planes flying overhead, such is the proximity to the airport.

It is home to a small number of shops and a local Post Office.  It's also home to a number of fabulous trditional pubs set in beautiful rustic surroundings.  The Church Inn is renowed for it's amazing food and friendly service.  As the name suggests, it sits alongside the local church St Wilfred's.  The church was constructed in 1245 and was originally dedicated to St Wilfrid & St Mary altrhough St Mary's name has recently been dropped.

The Village Hall, known as the Victory Hall, was built in 1921 as a memorial to World War I.  It's home to many local village organisations and is a place for locals to hold celebratons and meetings.  Mobberley has become a dormitory village as as a result of the opening of the M56 motorway and Second Runway at the Airport, impacting the area.

The most notable person from the Mobberley area is Trafford Leigh-Mallory.  He was Commander-in-Chief of RAF Fighter Command in World War II and Air Commander for the Normandy Invasion. 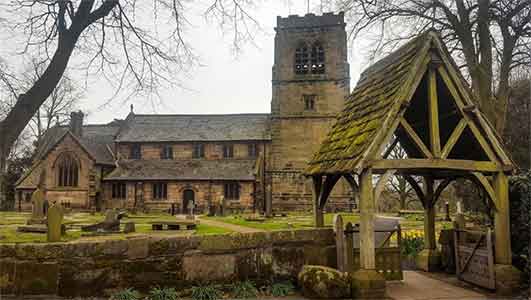