Our bespoke kitchens are designed and manufactured in our factory by artisan craftsmen.  We install our kitchen furniture right across Cheshire including the Alderley Edge area, hand-making every cabinet and complementary piece of furniture.  The Kitchen is the main focal point of a home and a Bespoke Kitchen can add immense value to your home.

Each kitchen we design is different and bespoke.  We customise each kitchen based to our customer's needs, so each kitchen will be unique to you.  This is from the precision machine-cut worktops to the fine detailing on the drawers and the individual units.  We provide the highest quality handmade cabinets, drawers and units to all of our customers in the Alderley Edge area.  Our vision is to create an ergonomic working space for all of our customers.  An individual designer kitchen to work in and to enhance your home. You will find our luxury bespoke kitchens in the very best homes in Alderley Edge and the surrounding area!

Knutsford is location close to Cheshire's Golden Triangle of Alderley Edge, Wilmslow and Prestbury.  The area is famous for large and expensive houses, glorious countryside and celebrities.  It is 14 miles south-west of Manchester City Centre.  As of the 2011 Census the population was 13,191.

It sits on the Cheshire Plain between the Peak District and the Welsh mountains.  Knutsford and the surrounding villages are well-sought afer area and attract affluence and celebrities.

The town centre is home to several restaurants and pubs, boutique shops and coffee shops.  A number of supermarkets are also located in the town.  There are a numer of annual events including the Tatton Park Show and the Cheshire County Show.  The Knutsford Royal May Day Festival is where the May Queen is crowned and the local Heath is home to a large funafair.

Served by excellent transport links, Knutsford is seen as a dormitory town for people working in Manchester, Liverpool and Chester.  Close to Junction 19 on the M6 motorway and Junction 7 on the M56, one couldn't ask for better motorway links to other parts of the country.  Knutsford trainstation offers links to Manchester, Altrincham and Chester.  Manchester Airport is conveniently located just 5 miles away.

Knutsford was referenced in the Domesday Book of 1086 as Cunetsford (Canute's ford - named after King Canute the King of England between 1016 and 1035).  Knutsford Gaol was built in 1817, later turned into a military prison during World War I and eventually demolished in 1934.

Following World War II, housing estates were built for overspill from Manchester, namely the Longridge Overspill Estate.  These were later sold to the occupants or transferred to Manchester Methodist Housing. 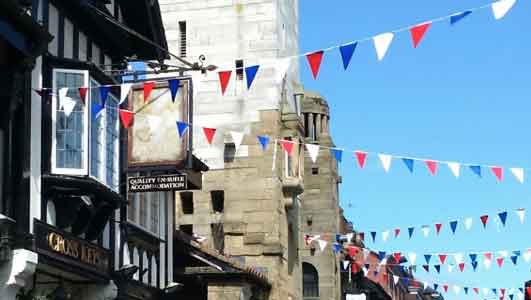