We manufacture all of our kitchens in our local factory by our dedicated team of artisan craftsmen.  Each of our bespoke kitchens are designed purely by us, with each individual design being unique and tailored to your requirements.   Our team install kitchens across the quaint village of Holmes Chapel and the surrounding area.  It is well known that the kitchen should be the centre piece of your home.  This is why we consistently provide the highest quality of handmade cabinets, drawers and units to all of our customers in Holmes Chapel.

If you are looking for bespoek kitchens in Holmes Chapel then choose Sheerin! Our vision is to create an ergonomic working space for all of our customers. An individual designer kitchen is intended to work in, and to enhance your home. You will find our luxury bespoke kitchens in the very best homes in Holmes Chapel and the surrounding areas! Each designer kitchen we design will be different and hand-made for you.  We customise each kitchen after listening and understanding what each of our customers want.  So you can be sure your kitchen will be unique and right for you. This includes the fine detailing on each of the individual kitchen units and drawers, and the precision-cut worktops that give each kitchen that added edge and finish.  Call us now for a Free Quote!

Holmes Chapel is located in the authority area of Cheshire East, in the North-West of England.  It sits 21 miles south of Manchester City Centre and within 8 miles north of the railway town of Crewe.  The Village has the River Dane flowing through the top end of the village.  It is twinned with the French town of Bessancourt and has been since 1980.   The parish was previously known as Church Hulme.

In the 2011 census the population was 5,605, although this has grown since then.  This is due in large to the construction of large housing developments, bringing in an influx of people.  One of the attractions of the village is it's convenience for commuters.  Holmes Chapel Railway Station is one of the busiest in the UK.  As a result, this increases the attraction of the area.

The Village features a precinct with a number of shops and outlets, including a fish and chip ship, pizzeria, chemist and a library.  In addition, it is also home to a number of pubs.  There is one main secondary school in the area, Holmes Chapel Comprehensive School.  Two primary schools are also in the area; Hermitage Primary School and Holmes Chapel Primary School.  One GP Practice located on London Road serves the area.

The most distinguishable landmark in the area is St Luke's Church which is a Grade I listed building.  It was built in 1430, originally in a timber structure, with later additions of brick walls and enclaving.

Notable people who come from the area include footballers Dean Ashton, Andy Porter and Seth Johnson.  Harry Styles from One Direction is also from the area. 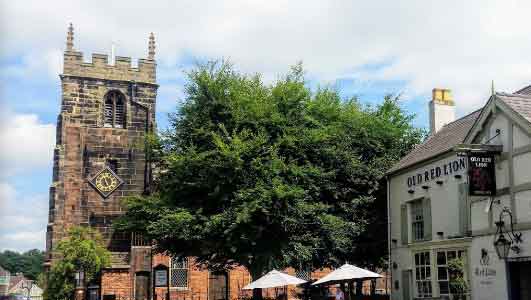